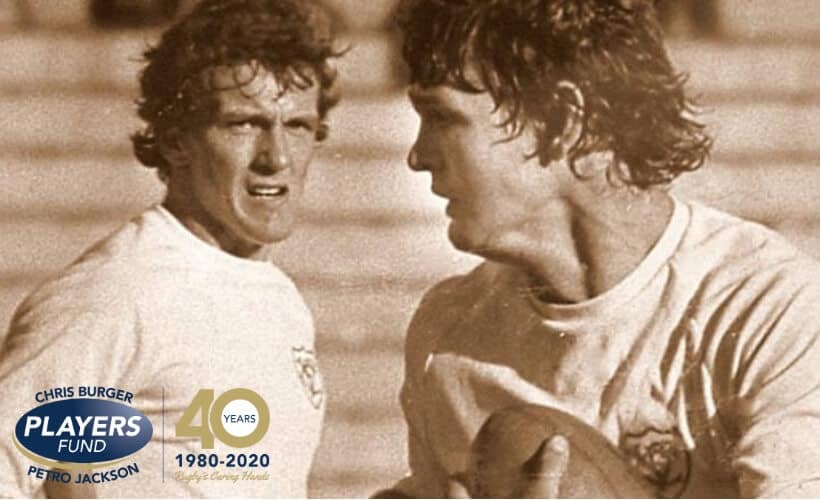 The birth of the Chris Burger Petro Jackson Players’ Fund

In the lead-up to the 40th anniversary of the Chris Burger Petro Jackson Players’ Fund on September 9, key figures will be sharing personal accounts and provide insight into the passionate, unwavering and life-saving work of the fund, fondly known as Rugby’s Caring Hands.

The depth of the brotherhood forged on the rugby field came to light following the tragic death of Western Province fullback Chris Burger during a Currie Cup match against Free State in Bloemfontein on August 30, 1980.

Surging back to collect a kick in the final moments of the match, Burger was caught in possession by two charging Free State forwards and a maul ensued. The 28-year-old suffered a broken neck during the play and passed away in hospital in the early hours of the following morning.

Burger’s death sent shockwaves through South African rugby. However, it also brought forth change – meaningful and ever-evolving change – as the Western Province star’s teammates founded the Chris Burger Players’ Memorial Fund on September 9. Then Springbok and Western Province captain Morné du Plessis played a leading role in the creation of the fund and its legacy, serving as Chairman for 38 years.

“It was a tragic day,” recalled Du Plessis. “When you know something is serious, you don’t have to be told, but Chris was still conscious when I arrived at the hospital. When we started talking, he spoke about the play and said he hoped he didn’t let the team down and I said, ‘Don’t worry about that.’

“Then he said, ‘Please look after my family and ask the guys to see that they’re okay.’ Even then, being a young man, I still didn’t fully realise the gravity of the situation and two hours later, he passed. We were absolutely devastated.

“That last conversation spurred us on to do something and it was also a trigger to question things that weren’t in place. Those weren’t popular topics but it was the reality and fortunately, over the years, everyone understood that it’s rugby’s responsibility to support players and do whatever possible to prevent serious injuries.”

Du Plessis said of his former teammate, “Chris was a very fun and jovial guy and extremely well-liked in the team. He was very fast and versatile; he had the skill to play flyhalf through to fullback, but his preferred position was No.15. He was an attacking fullback, which is probably why he decided to come to Villagers [from Police] and made him a valuable asset to the club and Western Province.”

Seven years after Burger’s accident, the same forlorn fate befell Petro Jackson. Playing on the wing for hosts Kylemore against Excelsior in a zone competition game on April 11, 1987, Jackson was tackled near the touchline.

The momentum of the tackle carried the diminutive dynamo over a gravel path that ran alongside the field and into an asbestos barrier. A passionate and popular player among his teammates, “Spekkie”, as he was affectionately known, passed away before the arrival of the ambulance.

“The Chris Burger Fund looked after their players, however, it was not representative of the SA Rugby Board at the time, whereas the Petro Jackson Fund formed part of SARU but didn’t have the infrastructure to provide the same level of support to its players, with the one and only recipient of the fund being Ian Jacobs from Kimberly, who was injured on July 15, 1989.

“If we wanted to make strides, it was imperative for the fund to become part of South African rugby. The merger meant that we now had one fund to assist ALL injured players – and – very significantly, that it was accommodated by the new board.

“That established the fact that the Chris Burger Petro Jackson Players’ Fund should be the baby of South African rugby, and that’s what it ultimately became. Sponsorships drastically improved from there and the relationship between the fund and South African rugby grew from strength to strength,” said Jakoet.

Jakoet, a legendary South African rugby administrator, was the Players’ Fund’s other great pillar for 36 years, contributing in a multitude of manners including as a Trustee, Assistance Committee member, Executive and as a driving force behind the world-renowned BokSmart national rugby safety programme.

Over the past four decades, the Players’ Fund has aided over 500 fallen heroes and currently assists 107 recipients who sustained catastrophic head, neck and spinal injuries on the rugby field.

The fund’s history from 1980-2010 is chronicled in the book Samaritan of South African Rugby. For more information and to donate to Rugby’s Caring Hands, visit www.playersfund.org.za.