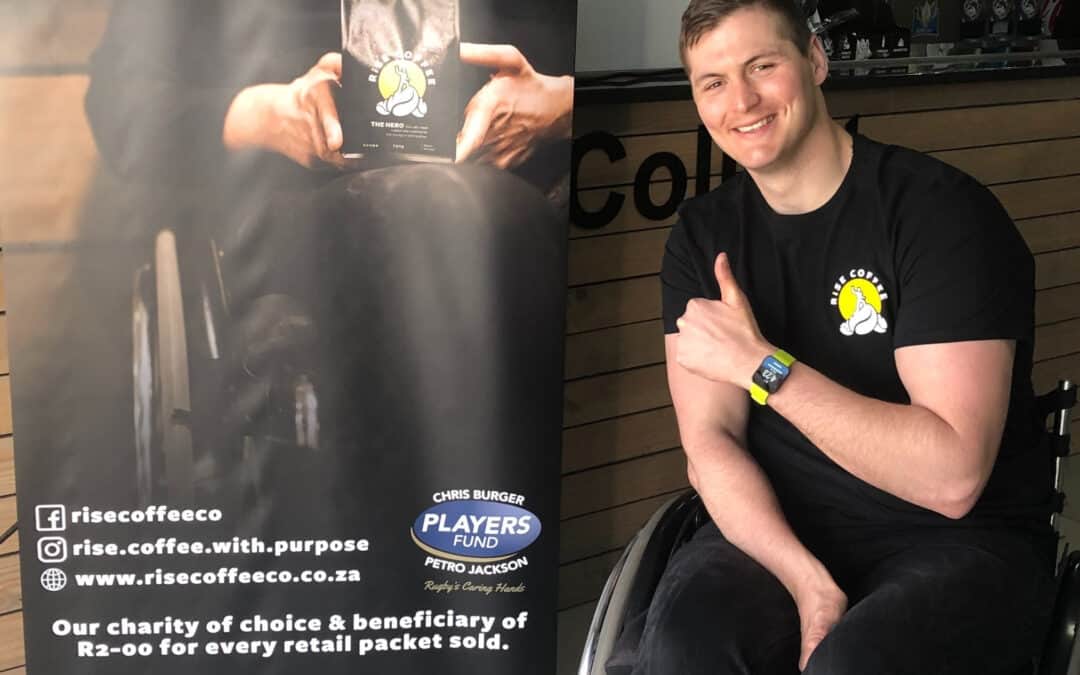 24-year-old Heinrich “Ollie” Terblanche was a determined rugby player with high hopes. He had played in the Varsity Cup competition for the University of Johannesburg, spent the 2014 season playing for the Carterton and Wairarapa-Bush rugby clubs in New Zealand and when his life changed his life in 2015 he was training to participate in the second division of the Currie Cup for the South Western Districts Eagles.

On 24 January 2015, whilst playing prop in a pre-match at Outeniqua Park Ollie fractured his neck at C6/C7. This injury immediately changed his future and that of his then fiancé – Chanel Supra.  There are no courses and training sessions that can prepare anyone for this type of injury. Often the only factors that can be controlled are one’s attitude, level of perseverance and a team approach to life. Looking back at Ollie’s journey, all these factors have been present and have meant that he has advanced as a person and overcome barriers that no one would have expected and he continues to inspire everyone he meets.

Through his injury, Ollie became a recipient of the Chris Burger Petro Jackson Players’ Fund a non-profit and public benefit organisation and the official charity of the Springboks. By providing physical, psychological and emotional assistance to rugby players who have sustained serious injuries on the field the organisation has also become known as Rugby’s Caring Hands. Since inception in 1980 the Fund has been alongside over 500 seriously injured players on their journeys post injury.

Since Ollie’s injury the Fund has been a pillar of strength which Ollie and his family have been able to rely on. With the necessary mobility equipment having been provided, as well as help with renovations to his home being made to ensure he is able to lead as independent a life as possible. Ollie reflected on the role that the Players’ Fund has played in his life:

“The Players’ Fund helped me pick myself up again after my accident. Because after an injury like this you truly lose your identity. But the Fund has helped me realise that life goes on, so you have to fight for your dreams and figure the rest out along the way.”

In 2019 Ollie translated his passion for rugby and for telling his story into a well-loved coffee brand called Rise Coffee. Which has recently been taken onto the shelves of Checkers and Spar stores along the South Coast.

Rise Coffee Co was founded on the belief that life can change in a flash and the challenges we face must be conquered in order to grow into a far greater being. We believe that each person must endure their trials and root themselves in good soil, sprout from the darkness, and rise from the earth to claim their new life.

We hope that every bag will inspire you to weather the storm you are facing and to rise from your darkness. That you will be reminded to grow strong and shoot into the skies, to have an honest and good heart and to bear fruit with patience.

The Players’ Fund is proud to have been nominated as Ollie’s charity of choice, with a financial contribution of R2 from each sale being donated to The Players’ Fund. This gesture and commitment has helped raise R11 400 for those like Ollie whose futures were changed in the blink of an eye on the field.

“My dream for Rise Coffee is to make a difference and to continue to donate regularly to the Players’ Fund and also to have our brand in every retail shop in South Africa….and all over the world. Rise Coffee encourages people to rise out of circumstances no matter what the odds are, which is why a big dream of mine is to have Rise Coffee in hospitals like the one where I spent a lot of time after my injury.”

As well as promoting delicious coffee, Ollie continues to train daily with his wife, fighting to walk short distances with the use of crutches in the hopes of someday walking independently.

The Players’ Fund relies on donations from corporate South Africa as well as from the public, with section 18A’s provided for tax relief purposes. All the way to donate can be found here https://playersfund.org.za/get-involved/ .

A campaign is also currently running where all donors of R1000 or more will receive a personal phone call from a former Springbok.