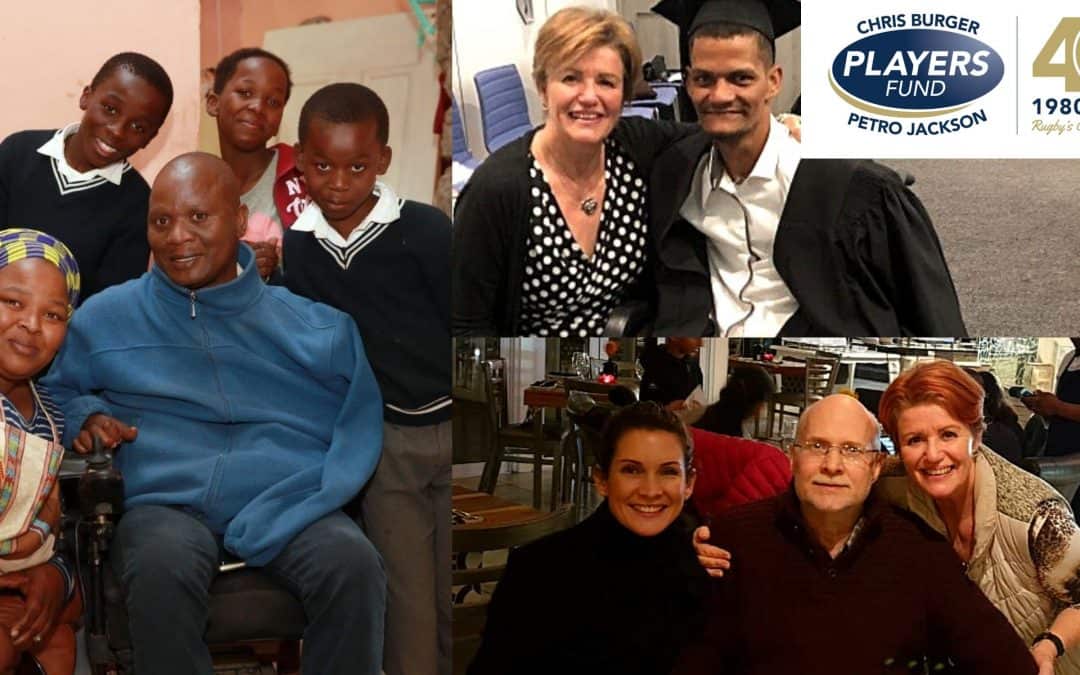 The Chris Burger Petro Jackson Players’ Fund is an organisation that doesn’t want new ‘members,’ for ‘members’ all suffered the misfortune of sustaining catastrophic head, neck or spinal injuries on the rugby field.

In one tragic moment, the lives of an unfortunate player and his family are forever altered, their world turned upside down. Known as Rugby’s Caring Hands, the Fund enters the fold to support them in their time of heartache and panic, and remains a constant companion on their life journey, offering wide-ranging support.

The official charity of SA Rugby has aided over 500 fallen heroes over the years and currently assists 107 recipients. Ahead of the Fund’s 40th anniversary on September 9, three recipients from different walks of life shared their stories.

May 2, 1984 was the ill-fated day of George Visser’s injury. He was 21 and playing hooker for the Kanniedood residence at Rand Afrikaans University, now known as the University of Johannesburg.

“Hostel rugby was quite hostile back then,” said Visser. “We had a line-out five metres from the opposition’s try-line; I threw in and we set-up a driving maul. I joined in to rip and recycle the ball from the lock when the referee blew the whistle.

“With the whistle having gone, I relaxed and then, suddenly, a teammate of mine barged in and crashed into me from behind. My head was still on the lock’s chest and stomach area and I just heard my neck snap twice and I immediately fell to the ground.

“I’ve had a lot of luck with the bad luck, I must say. I suffered a dislocation of my C4/5 vertebrae, and an incomplete injury of the spinal cord, so I still have some sensation, on the left side more than the right. I’m more of a paraplegic than a quadriplegic.

“I was very weak in the beginning; I couldn’t even lift up my arms the first few months and when the physiotherapist and nurses tried to sit me up in the wheelchair, I would pass out.

“Fortunately, with a lot of physiotherapy and exercising, I was eventually able to push myself in the chair and transfer in and out of the bed and car later on.” 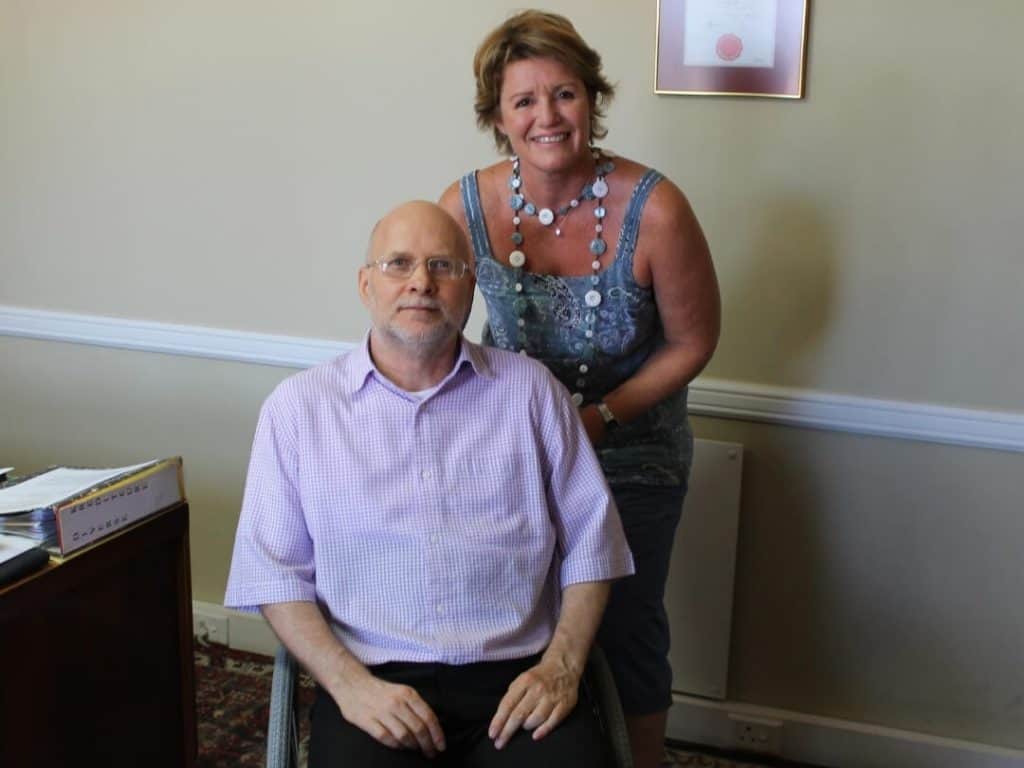 Speaking of cars, Hartenbos-based Visser added, “We bought the first co-driver, a mechanism that allows you to manoeuvre the accelerator and brake with one lever from Neville Cohen from Chairman Industries, which my dad fitted for me. At that time, I’d never heard of or seen someone in a wheelchair capable of driving a vehicle, so that was very empowering.”

Visser said his strong support system shaped his future as a functioning and contributing member of society, from obtaining a BA degree through Unisa to working in the SANDF and private sector, to his current position as financial manager at the Marius van Coller Group of Companies, to getting married and becoming a father.

“My parents stood by me tremendously – my dad was actually there that evening when it happened. Their support is what saved me and, looking back, what made my future so much easier, and I now have a beautiful daughter, who’s in Grade 10.”

The 57-year-old has high praise for the Fund, saying, “The Fund assisted me with the purchase of a hoist and every year, we as the recipients receive a Christmas ‘cheque’, which is great.

“Again, I’m very fortunate that I’m not as dependent on the Fund as some of the other guys. I see what some of the recipients go through – some of them really battle – and the Fund does a fantastic job to assist them.

“Thank you to all those who’ve made this long history of the Fund possible. I’m sure I speak on behalf of all recipients and their families by saying we’re so grateful for the support we’ve been receiving.

“For being there when it matters and making us feel welcome in the family. God bless the founders, the staff and the donors.”

On May 20, 1990, six years after Visser’s injury, the same forlorn fate befell 18-year-old Amos Mzimeli in Mooiplaas in the Eastern Cape.

“I was still in school at the time, playing for the school and my local club. I was playing flank and captained Moonlight Rugby Club’s first team that day,” said Mzimeli.

“I was carrying the ball and as I was about to take contact, I lost my balance because of the bad ground we were playing on. My opponent and I ended up having a head-to-head collision and I broke my neck [C5 vertebra].” 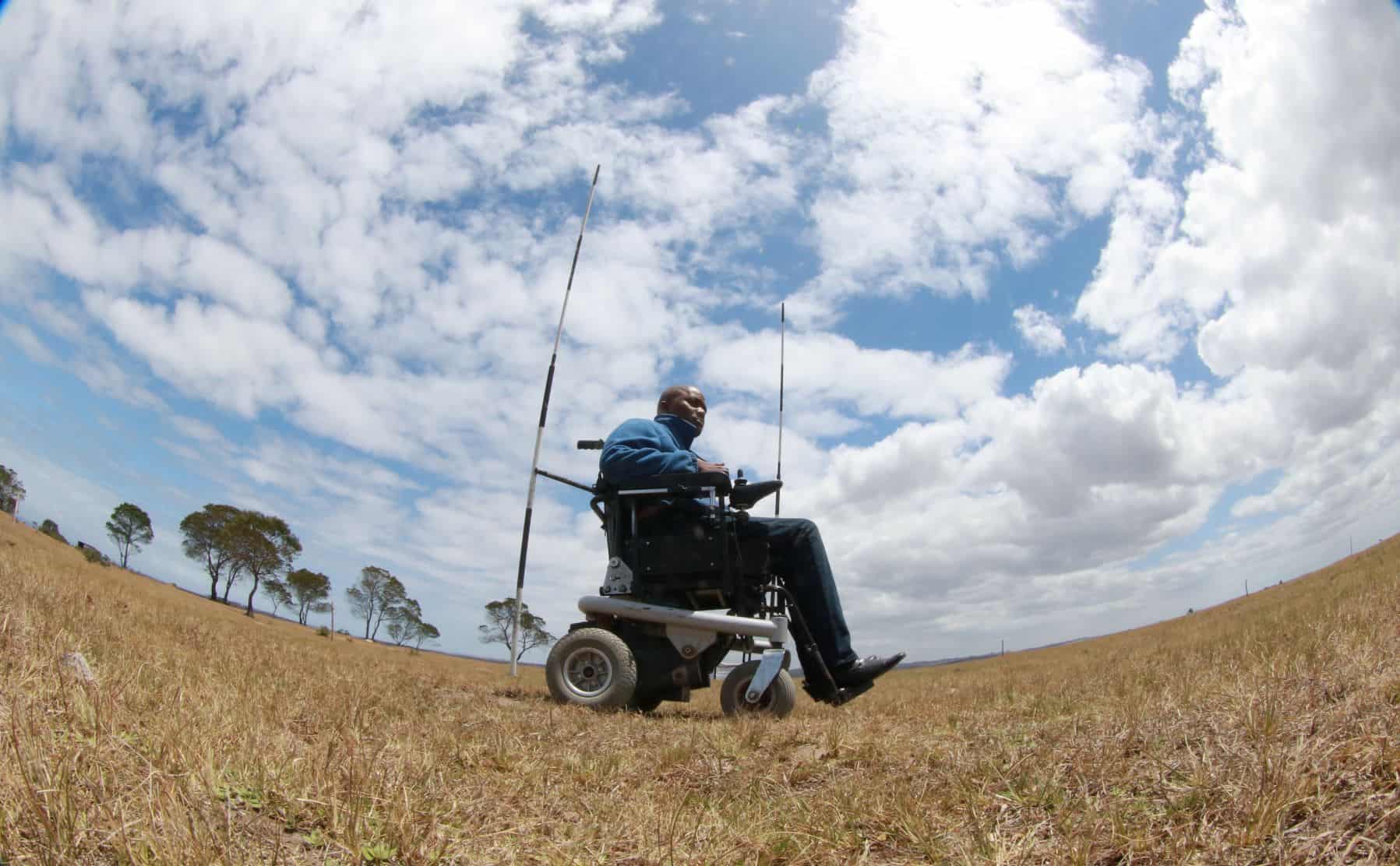 He said the support of the Fund was particularly crucial in the early, most difficult days. “I went into a deep depression after the injury. It hit me that I would never walk or be able to use my hands again and I felt like my life was over. The Fund’s helped me in many ways – they helped me out of that dark period and helped put some food on the table during that time.”

Having made an all-important mental shift, Mzimeli completed his schooling and earned a diploma in computer literacy. In 2000, he tied the knot and has three children, including a set of twins.

Fully embracing life, he became a shining light in Soto village, situated near Haga Haga in the Eastern Cape, by project-managing the concept and building of the Great Kei Disability Multipurpose Centre with the help of Lottery funding.

“Because of what I went through, I decided to do something for others with disabilities,” he explained. “In doing research, I went from village to village and it was shocking to find out that most people with disabilities were either physically, emotionally or sexually abused, as well as neglected.

“In many cases, the government grants the disabled person received were being spent by other family members, while many parents didn’t bother trying to educate their children…they believe disabled people are useless.

“Instead of wheelchairs, some were being pushed in wheelbarrows and others were being carried on a mattress. It was terrible to discover these things. With the support of partners and sponsors, we were able to purchase 15 wheelchairs, including four electric ones.”

The centre opened in 2014 and continues to go from strength to strength with Mzimeli as the key figure. “We started with 24 beneficiaries and we now have 129. The local municipality has built us a beautiful facility with an office, classes, hall and kitchen.

“We offer Learnership programmes and we have programmes that employ people with disabilities. We have dozens of graduates every year and had 24 last year.”

The community pillar was invited by the Japan International Cooperation Agency to attend its world-class workshops in Japan and Thailand last year, which he described as an opportunity of a lifetime.

“Representing South Africa as one of nine countries was an honour for me and it was a great experience. I learned a great deal about independent living,” said a proud and grateful Mzimeli.

The 48-year-old’s wonderful work hasn’t gone unnoticed. He’s earned a number of accolades, including a Local Hero award from the Daily Dispatch in 2019 and a service excellence award earlier this year. “The awards I’ve received are wonderful. I love the work that I do…it’s extremely rewarding.”

Mzimeli insists he wouldn’t be where he is today without the Fund. “The Fund plays a huge role in my life. If they weren’t part of my life, I would probably have passed away years ago.

“It’s so comforting to know you have their support and that support goes a long way to help you make something of your life.

“They’ve supplied me with electric wheelchairs and assist me when it needs to be serviced. They’ve become family; Gail is like my mother…she’s always there when I need her.”

Aubrey Saal is an example of where not all recipients are fortunate enough to be taken care of at home on a long-term basis and where there are few opportunities in small rural towns for those living with a disability.

The most recent of the three cases, Saal suffered a broken neck on August 8, 2010, moments before the 23-year-old Desert Daisies hooker was set to run out in a crunch clash in Springbok in the Northern Cape.

“We were warming up for the second division final. The first scrum drill went fine, but we engaged too quickly for the second. Our heads collided and I just collapsed. I was conscious, but I couldn’t move a muscle,” recalled Saal. He had broken his C4 vertebra.

“Paramedics put me on a trauma board and I was taken to Springbok Hospital by ambulance. They did the x-ray and told me I needed an operation, but they couldn’t fly me to Kimberley [some 800km away] because of bad weather.

“The following morning, we still couldn’t fly so at noon, they decided to drive me to Upington and from Upington airport, they flew me to Kimberley Hospital where I arrived at about 7pm.

“When my aunt arrived the next day, the doctors told her I was in ICU and that my lung had collapsed. Through all this and being in ICU, I had also developed a bedsore, which ultimately left me bedridden for three years.”

Saal said the Fund was instrumental in turning his fortunes around. “The Fund and the hospital arranged for me to be transported to the Western Cape Rehabilitation Centre to treat the bedsore.

“They helped me with upgrades to the home to make it accessible – they built a ramp and revamped my room with an accessible bathroom. They’ve assisted me with wheelchairs and they continue to help me with accommodation, medical supplies and wheelchair repairs.” 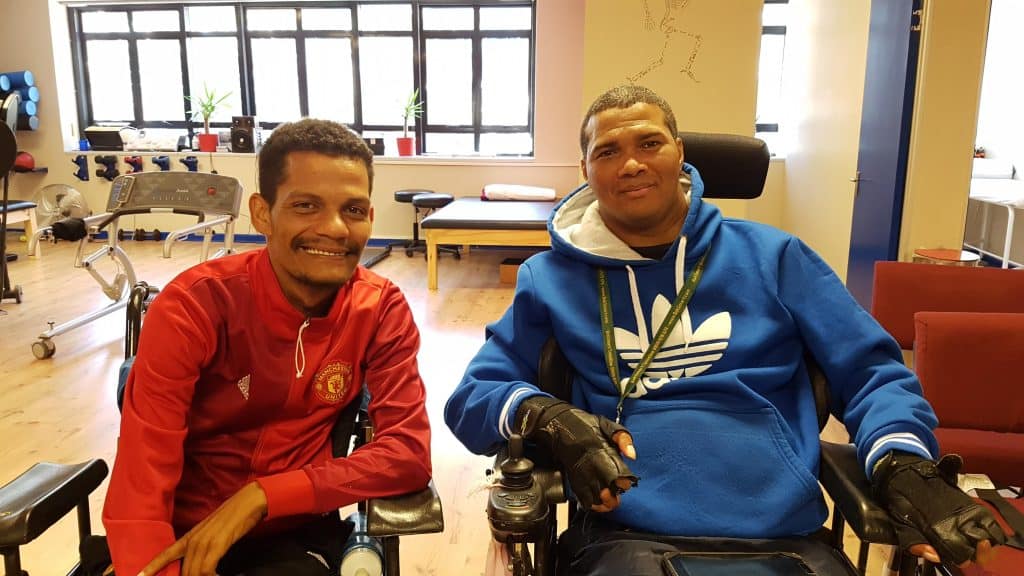 Back at his aunt’s residence in Concordia, Springbok, he found motivation and courage to pursue a life worth living. “I was at home for about a year-and-a-half and one day I decided that I don’t want to just sit at home and achieve nothing.

“There’s not much wheelchair accessibility or employment opportunities in Springbok, so I asked the Fund if they could help me with accommodation so I could look for opportunities.”

In 2016, he moved into the Eric Miles Cheshire Home in Milnerton, where a whole new world opened up to him. “It’s wonderful to live here! You have nurses to assist you, but you also have privacy. Milnerton is the centre point of Cape Town, where accessibility is so much better – we even have disabled transport – and there are a lot more opportunities.

“Not even a month after I moved here, I received a learnership opportunity from Engen and I’ve been studying through DYNA Training ever since.” The 33-year-old is currently studying Level 5 Generic Management.

“I’ve really enjoyed my studies and I’m very grateful for the opportunity and for everything the Fund’s done for me,” said Saal.