General Manager Gail Baerecke has been the key driving force of the Chris Burger Petro Jackson Players’ Fund for the past 15 years.

When Lynn Allen, a great servant of the Fund in her own right, ended her watch in 2005, Baerecke emerged as a Godsend.

Both an experienced nurse and private hospital client service manager, Baerecke boasted the perfect blend of medical background, understanding of hospital work as well as managerial skills to take over the reins. Over the past decade-and-a-half, she’s been the beating heart of the organisation. An unwavering workhorse, she’s the Fund’s most valuable player.

Baerecke’s the Pieter-Steph du Toit of the Fund – a tireless Terminator who pours her heart and soul into supporting seriously injured players and their families on their life-changing journeys with genuine care.

The passion that poured out of Du Toit after his career-defining performance in the Springboks’ famous 36-34 win over the All Blacks in Wellington in 2018 is the same passion Baerecke brings to the table on a daily basis.

“This is much more than a job, it’s a passion and encompasses everything in life,” said Baerecke.

“I realised very quickly that we [the Fund] are family to the recipients, by virtue of them not always having family or due to a lack of resources. We care about them and that care extends beyond the recipients – it’s a concern, a passion, an understanding and an empathy toward the circumstances that a family finds themselves in – we see them as a unit.”

She said of serving as General Manager, “It’s the greatest privilege of my career, if not my life. The recipients have been my biggest life teachers; they’ve taught me humility, how to face and overcome adversity, and how to be grateful every day for what I do have and not so concerned with what I don’t have. They’re incredibly inspirational.” 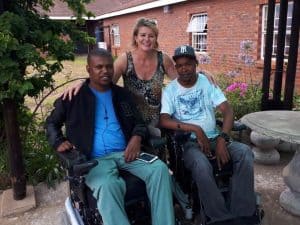 Gail with recipients Vuyo and Sikhosonke

The official charity of SA Rugby, the Fund has aided over 500 players who sustained catastrophic head, neck and spinal injuries on the field as it approaches its 40th anniversary on September 9.

Baerecke insists much of the credit for the Fund’s success and sustainability should go to the Green and Gold-tinted Board of Trustees. Currently, eight of the 14 Trustees are former Springboks – Chairman Jean de Villiers, founder and former long-serving Chairman Morné du Plessis, Deputy Chairman Hanyani Shimange, John Smit, Tiaan Strauss, Wayne Fyvie, FC Smit and Jowa Abrahams. Chester Williams also served prior to his untimely death nearly a year ago.

“The value of the Fund is the intellectual property we have on the Board. [Marketing Manager] Tori [Gardner] and [General and Financial Administrator] Aashia [Hendricks] and I are the worker bees, but the guidance and expertise from a philanthropic, networking and business perspective come from our Trustees and who they are…we would never manage without them.

“They keep on saying they’d never manage without us, but it goes both ways. It’s a match made in heaven. They are incredible men and women, who give of their time freely and make things happen. They have leveraging powers that surpass most businesses because they’re respected former Springboks, respected businessmen and most of all, respected good people.”

Rugby’s Caring Hands currently assists 107 recipients. “Our recipients cover the full spectrum of our demographic – from highly educated and resourced with access to support to those who are less fortunate and we have to ensure that everyone gets the same level of care. Everyone has different needs, so we look at everyone personally and provide support based on their individual needs,” said Baerecke.

That support starts from day one and includes helping injured players and their families understand the situation they find themselves in and the road ahead. “There’s a lot of teaching and learning that needs to be done. Spinal cord injuries are complex and affect many different organs and systems in the body, so it’s important to have an understanding of that – what must and mustn’t be done daily – and then for recipients to take responsibility for their own health to ensure, for example, that they don’t develop pressure sores.”

The support of the Fund is ever-evolving and, in recent years, there’s been a particular focus on empowering recipients. “The Fund has always been there to provide mobility equipment and that will continue, but we now partner with our recipients to empower them using the slogan #fromthechairtowhere. 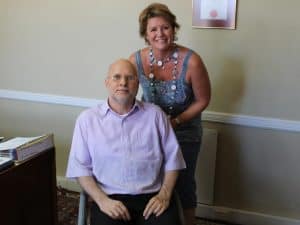 “Yes, their lives have unfortunately drastically changed, but it’s not over or necessarily shortened. We urge recipients to think about and work toward new goals, be it finishing school, pursuing tertiary education or a new line of work. In doing so, they realise that they’re still valuable assets and contributing members of their communities.”

Knowledge and prevention are pivotal pillars of the medical field and to this end, Baerecke doubles as the Serious Injury Case Manager for BokSmart, the national rugby safety programme established by the Fund and SA Rugby in 2009.

“In the unfortunate event of a serious head, neck or spine injury, I receive the BokSmart Serious Injury Report and follow-up with the patient, family and school or club,” she explained.

“We look at, in great detail, all aspects of the injury – how it happened, in the player’s own words and in what phase of play, when it happened – in the first or second half, the start, middle or latter part of the season and how the referee and medics handled the situation.

“We then identify the high-risk trends and flesh them out when we roll out the new phase of BokSmart every two years. For many years, there were an unacceptable number of scrum injuries, up to six one year, which prompted BokSmart to change the scrum laws prior to World Rugby adopting them, so South Africa drove the change to the scrum laws as they are today and as a result we’ve seen a huge reduction in the number of scrum injuries.”

“The International Rugby Safety and Player Welfare Conference is extremely important as travel is part of the game – from the highest level down to school tours. Injuries can occur to our players abroad and vice versa, so it’s crucial that we’re connected and work together so that, should such a case unfortunately arise, the player receives the right care and ultimately returns home safely.

“The other primary purpose of this conference is to learn from one another; we’ve learned an enormous amount of valuable information from other countries and so have they from us. They’re very complimentary of us and say the work we do in a third world country inspires them to continue to develop, which is a big feather in our cap,” remarked Baerecke.

What’s more, the Fund in 2016 partnered with Marelise Badenhorst, a physiotherapist and PhD student at the University of Cape Town, to conduct a first-of-its-kind quality of life study – an in-depth investigation of the consequences of catastrophic injuries suffered by South African rugby players.

“The most important requirement of the study was for the interviews to be conducted face-to-face, because of the varying backgrounds and circumstances of the recipients, to obtain the most accurate information possible, so we traveled across the country,” explained Baerecke.

“The study was a real eye-opener. We gained a greater degree of insight into the challenges our recipients face – difficulties gaining employment due to inaccessibility and/or the fact that they’re disabled, a lack of transport and what was important to them.

“It highlighted just how important it is to stay close to the affected family, especially immediately after the injury; to provide emotional and psycho-social support during those first few weeks are so critical and appreciated.

“We also analysed the field-side care and established that the majority of the players knew that they were paralysed and that’s important because that’s life or death-type of information for paramedics to see that they stabilise the neck and spine and immediately transport the player to the right hospital.

“We gained significant scientific-based data and information that we can use to leverage change and continue to evolve,” concluded Baerecke.