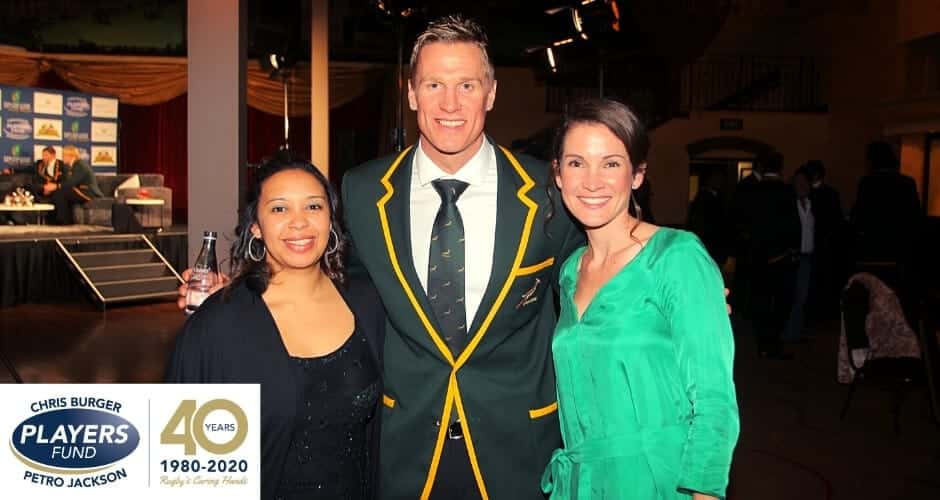 Every team needs a playmaker, and Tori Gardner fills that role for Rugby’s Caring Hands.

Just like a scrumhalf is the link between the forwards and backs, Marketing Manager Gardner is the glue between the Chris Burger Petro Jackson Players’ Fund Board of Trustees, sponsors and recipients.

The official charity of SA Rugby, which celebrates its 40th anniversary on September 9, has aided over 500 fallen heroes over the years and currently assists 107 recipients who sustained catastrophic head, neck and spinal injuries on the field.

Gardner brings the creativity and vision of a world-class playmaker like Springbok No.9 Faf de Klerk to the Fund. She ensures the (fundraising) game is played in the right areas of the field with tactical nous and sound decision-making.

“I’ve always been a very sporty person and understanding that these rugby players once ran onto the field with youth and exuberance that was taken away so quickly, really struck a chord,” she said of joining the Fund in 2014.

Like rugby has evolved over the years, so, too, has marketing and fundraising. The posts have shifted from traditional print to the digital realm, where Gardner has taken the Fund into the future with innovative ideas and consistently engaging communication through all available platforms.

Primary to Gardner’s plan was introducing a fresh, personal and powerful approach to raising funds and awareness.

“We take great pride in the strong communication strategy we’ve developed, which is highlighting the incredible stories our office has the privilege of getting to know with each of our recipients,” she said.

“We’ve taken it on as our responsibility to share their stories of strength, courage and resilience with not only our support squad but the public at large. The mindset our recipients’ have of focusing on what they have rather than what they don’t have and the positive and powerful way they face their challenges transcends sport.

“Through social media, we’re able to share these inspirational stories to a wider audience and it’s been very well received. There is a deep appreciation for the impact that each story has on our audience, with many followers applauding our remarkable recipients and sharing how their stories have given them newfound perspective on their own lives.”

The campaign sees the Fund work hand-in-hand with recipients to ensure they are comfortable to share their stories and that they bring their individual messages of fortitude and rising above adversity into light.

With a solid foundation, core values and intentional interactions, the Fund’s built strong and lasting relationships that stand them in good stead for the next 40 years.

“While being clear and concise, there’s always been a personal element to our communication with every sponsor, individual donor and recipient. We’ve taken the best elements out of the previous era, like letter writing, online to enhance and cement many relationships within the rugby community.

“We couldn’t do any of the work that has been achieved over the past 40 years without relationships, which are as strong as they are because of the values that have extended from the Board room to the office and into our everyday actions.

“We genuinely care about our recipients, their families and our partners; we’re approachable, accountable, dependable and transparent. With the strong foundations we have in our Board and in the office, we work together well as a team and that gives us stability, which is more important than ever in the Covid-19 era,” said Gardner.

“The rugby fraternity at large have been incredibly supportive. All 14 unions and organisations like MyPlayers, the SA Rugby Legends, The Sharks Former Players Association, The Barbarians and Barney’s Army see us as part of their teams and we know that when collaboration opportunities arise, that they’ll be there,” she added.

With its strong online presence and new communication strategy, there’s now greater awareness of the Fund than ever before.

“There’s a clearer understanding of what we do,” said Gardner. “When I came in, there were a lot of preconceptions that we only assist professional players when, in fact, our support spans all levels of the game and areas of the country.

“More people are now also aware that our support isn’t once-off. Recipients of the Fund become members of the family; we partner with them and their loved ones on their life journeys.

“It’s not just a case of supplying wheelchairs – we take a holistic approach. It’s understanding each individual’s level of injury and unique circumstances to improve their quality of life based on their individual needs, be it, for example, secondary rehabilitation or mobility in and out of their home.

“It’s about encouragement with every interaction, to motivate recipients to strive toward a goal, in rehabilitation, education or workwise. It’s about helping the family of the recipient as well, being there for them in their heartache and during the challenges of trying to support the player after their injury.”

Crucial to the sustainability of the Fund has been the support it receives from SA Rugby and the Springboks.

“Being the official charity of SA Rugby is a great honour, and the support of the Springboks has been key in our fundraising efforts over the years.

“From the old telethons on SuperSport to formal dinners and other special events like braais, none of the large-scale events we’ve held would’ve been possible without the Springboks’ personalised support for the Fund and the sponsors they attract.

“Being able to get the entire Springbok squad and management team into a room is a highly sought after ‘trump card’ that very few charities have – that ability to give back to the corporates and individuals who support us with exclusive access to our national heroes.

“What’s more, we’re in a fortunate position to be a public benefit as well as a non-profit organisation. In this day and age, when making donations it’s always nice for donors to receive a Section 18A Certificate for tax relief purposes.”

Gardner admits the Covid-19 crisis has created grave challenges but added that the Fund is rolling with the pandemic punches.

“From a fundraising perspective, it is a scary environment to be in, but we remain positive and we’re tackling it head-on. We have the responsibility of looking after our recipients, so we have the motivation to keep pushing on and adapting.

“Given the current circumstances, hosting one particular marquee event like the annual formal dinner seems less likely going forward, so we’ve had to adapt and think of new ways to make use of the special relationship we have.”

Pienaar wrapped up the Class of ’95 virtual event by announcing the launch of limited edition Springbok Supporters’ face masks in celebration of their epic triumph at Ellis Park, with all funds raised through the sales from Pick n Pay stores going to Rugby’s Caring Hands.

“The Legends Series led to the Women in Rugby campaign, which gave us an opportunity to shine the spotlight on leading ladies and strong pillars of support off the field. The fact that we have had such a stellar line-up is an honour and we have been able to showcase some remarkable women in Women’s Month.”

The ‘new normal’, Gardner indicated, is an opportunity for more novel fundraising initiatives, while hope of a roaring 2021 is on the horizon.

“Through GivenGain and BackaBuddy, we have a number of support squad members who raise funds on their own by competing in the 94.7 or Cape Epic, for example, and I believe this will become a much stronger form of fundraising in this new era.

“Next year’s British and Irish Lions tour is mightily exciting not only for fans but for us as well, being the chosen charity of the tour. We’re really looking forward to working with SA Rugby and the players; it’s such a rare highlight and the possibilities from a fundraising perspective are endless.”

On a personal note, Gardner said her involvement with the Fund has been life-changing.

“It’s been an incredible privilege to get to know the recipients, to travel the rocky road with them and make fond memories, like watching a live rugby game together or facilitating the meeting of their favourite players.

“I’ll never forget going to visit Amos Mzimeli in Soto village in the Eastern Cape. Being welcomed into his home, meeting his wife and children and visiting the Great Kei Disability Multipurpose Centre he championed, it was so fulfilling. I felt more in-tune with our country and considered this visit, like many others, an enormous privilege.

“On the other side of things, it’s been incredibly rewarding working with the Board of Trustees – getting to know and work alongside absolute legends of the game I grew up watching and seeing their passion to assist those who were seriously injured playing the game they love.”