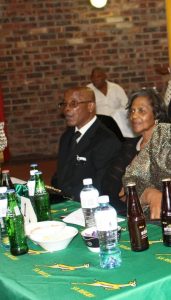 The Nyanga Sports Council and all the Nyanga stakeholders honoured Norman Mbiko in a historic event held at the Zolani Centre, Nyanga on Saturday 7 April 2018 for his outstanding rugby achievements and his contribution to the development of the game. Norman is really an icon the community as was evident at the event.

The event was attended by prominent local rugby heroes and sports persons who played with Norman. Broadness Cona who played with Norman in the provincial and national rugby sides, in paying tribute to Norman, alluded to the fact that very few persons in the community received any accolades and acknowledgement during their playing days, “ they are really the unsung heroes of yesteryear “. 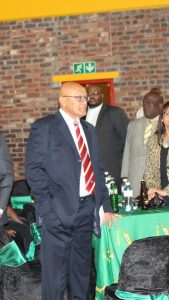 Events like this not only honour the sports heroes in the community for their achievement in sport but act as a platform for the public to thank them for being the excellent role models they are in the community.

It was the first time that a prominent sportsperson was honoured by the community and his role in the community was highlighted by most of the speakers who included the Councillor for the area, Brigadier of the Nyanga police, Mrs Beauty, the Chairperson of the Sports and Recreation Portfolio in Parliament and Patty Kuhn a SARU Exco member.

Jowa Abrahams spoke about the role the Chris Burger Petro Jackson Players Fund plays in supporting those who suffered serious injuries and highlighted Norman’s 20 years’ service as a trustee. Jowa also extended an apology on behalf of the Chairperson, Morne du Plessis who was then overseas.

The Players’ Fund was thanked for its role and contribution to the event.

Norman is currently the only surviving Black Springbok captain.