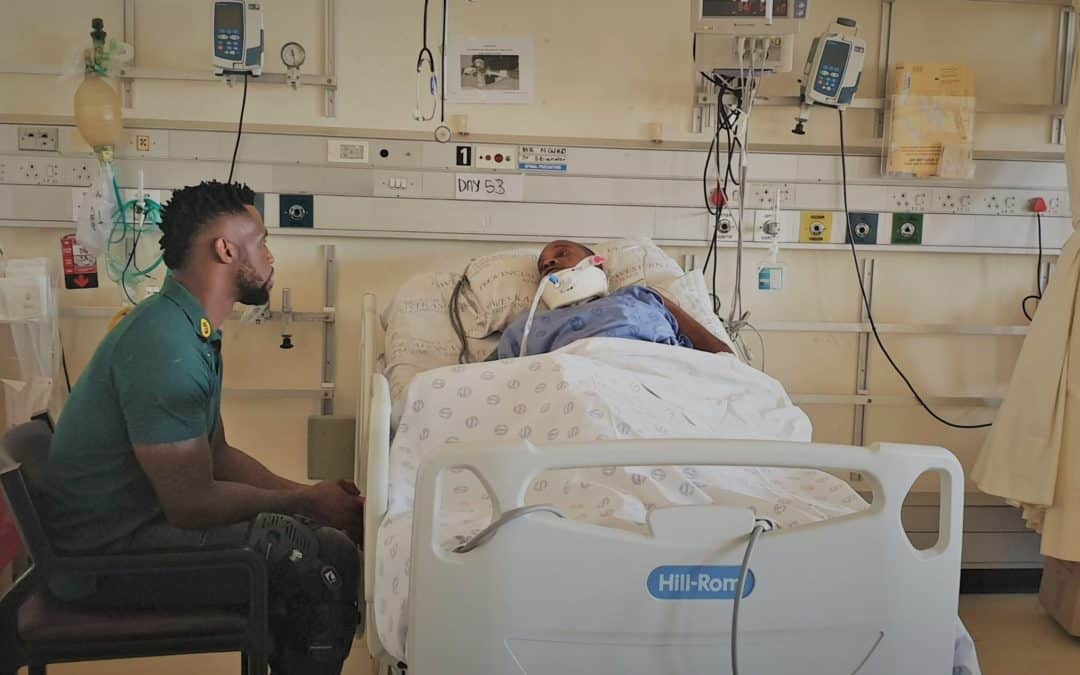 On 20 April this year Sicelo was taking part in a local Easter Rugby Tournament, playing prop for Lovedale RC in Op Die Berg, a small farming community just above Ceres in the Kouebookeveld. In the 10th minute of the game the scrum collapsed and he sustained a serious neck injury, with damage to his spinal cord.

Although Sicelo grew up in the Eastern Cape, he had been part of a long standing farming collaboration between the Ceres fruit growing region and his home town – Sterkspruit, EC (close to Aliwal North), where he and many others have been up-skilled with the latest farming techniques which has enabled them to take this learning back to their farming community during the off-season.

Since his devastating spinal cord injury, he has been in the ICU at Groote Schuur Hospital and he received news just before the visit that he will soon be moved into a regular ward and then to the Western Cape Rehab Centre to commence an intensive few months of rehabilitation. He has regaining some feeling in his upper arms, which he proudly shared with Siya as they had a heart to heart during the visit.

Sicelo was very touched by the surprise visit and words of encouragement that he received from the Springbok captain.

The Players’ Fund relies heavily on private and corporate donations and is Section 18A accredited. Please contact the Players’ Fund office on events@playersfund.org.za should you wish to join the #SupportSquad behind seriously injured rugby players in South Africa. You can also see all the ways to donate by clicking HERE.

The hospital staff at Groote Schuur were equally excited to have Siya in their ward.