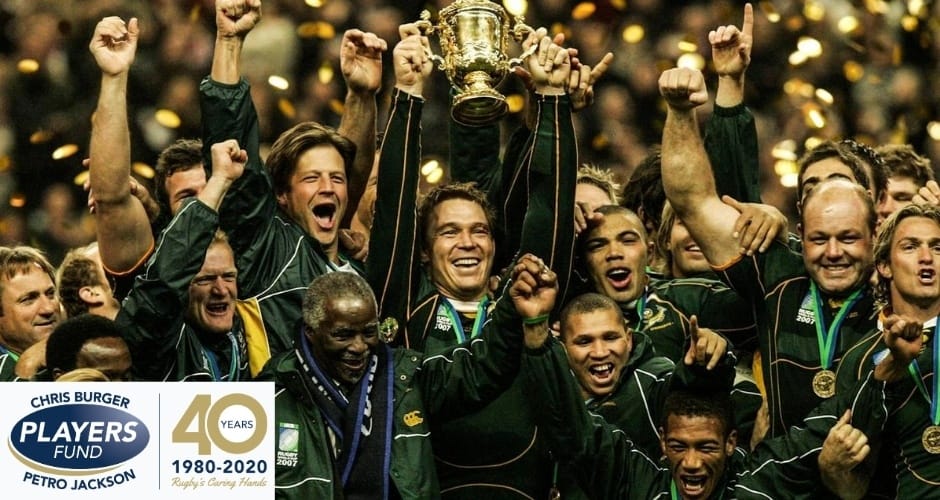 From Springboks to Players’ Fund Trustees

Stars who have donned the Green and Gold are part of the Chris Burger Petro Jackson Players’ Fund’s DNA.

Springboks have been at the very core of the charity since its inception, with then-South African captain Morné du Plessis having launched the Fund in honour of his Western Province teammate Chris Burger, who’d sustained a fatal neck injury during a Currie Cup match in 1980.

A Springbok thread forms the spine of the Fund – such has been the consistent contributions of former players to the organisation’s legacy. Known as Rugby’s Caring Hands, the Fund has aided over 500 fallen heroes over the years and currently assists 107 recipients who sustained catastrophic head, neck and spinal injuries.

Currently, eight of the 14 Trustees making up the board are ex-Springboks. As the Fund nears its 40th anniversary on September 9, Du Plessis remains a pillar and is one of four former captains on the board. He’s joined by Jean de Villiers, who succeeded Du Plessis as Chairman in 2018, scrumming down between them, appropriately, is John Smit, with Tiaan Strauss being the fourth.

Hanyani Shimange serves as Deputy Chairman and sits alongside long-serving Trustees FC Smit, Jowa Abrahams and Wayne Fyvie, each bringing with them – like they did in their playing days – individual strengths on top of a shared passion. HO de Villiers, Peter Whipp and 1995 World Cup-winning duo Joel Stransky and Chester Williams are the other former Springboks who sat on the board in the past.

“Having an ex-rugby contingent as part of the board, I believe, gives us a rounded view of how to approach the various challenges and tasks the Fund faces to continue to raise funds and help injured players,” said Smit, who led the Springboks to a second World Cup crown in 2007.

Smit, who captained South Africa a record 83 times and played 111 Tests, has been involved with the Fund for the past 20 years. “My introduction to the Players’ Fund was when I first made the Springbok squad in 2000. We still did the telethons back then. Everyone was calling in to speak to the likes of Joost van der Westhuizen, Bobby Skinstad and Rassie Erasmus, so I mostly had to explain who I was and that those guys were busy on the other lines,” he quipped. 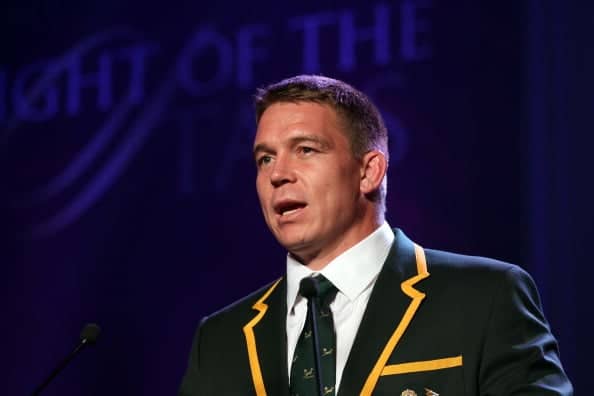 The telethons turned into banquets which the Springboks, and often their opponents of that given weekend, attend annually. The Fund’s marquee fundraiser is not only a highlight for the charity and the recipients in attendance, but the Springbok stars themselves, said Smit.

“As the official charity of SA Rugby, the Fund becomes part and parcel of your life as a Springbok. Every rugby player knows the risks involved when they run on to the field and when the opportunity comes to help those who’ve unfortunately had accidents, you jump on it.

“The Springboks, as a collective, don’t do many functions; not even the title sponsor gets that type of exposure, but the Players’ Fund banquet isn’t just any function. As captain, it was the easiest function to motivate guys for because nothing needed to be said. The players were eager to do their bit for the cause and the evenings were always highly enjoyable.”

The Springbok and Sharks legend had a serious injury scare himself during a Super Rugby match against the Bulls in Pretoria in 2010. “My neck got jammed in a scrum and I immediately knew that there was something wrong. Fortunately, all it did was cause an impingement on my spine, but that did lead to a lack of power and intense pain over the following months.

“I ended up having surgery – to fuse the C5 and C6 vertebrae – and had the best possible outcome. It hit me, when I woke up, how fortunate I was! I wish it always works out like that, but not having an organisation like the Fund would make a very difficult situation even tougher.”

Smit cemented his role within Rugby’s Caring Hands when he joined the Board of Trustees in 2013. “I’d just come back to South Africa after finishing my career at Saracens. I received a call from Morné asking me to come on board as a Trustee and I gladly accepted.”

Through his experiences as both a player and a Trustee, Smit said he has the utmost respect for the recipients. “Every time I meet a recipient, I’m in awe of their bravery and positivity. One never knows how you’ll respond to such a challenge until it happens and I haven’t met a single recipient who’s bitter, which speaks to their incredible character and love for the game.”

Smit said he’s learned that every case is unique, even if players sustained the same level of spinal cord injury. “Every single recipient has individual needs that are different from the last. Their challenges all differ from one to the other and this is where [Fund General Manager] Gail [Baerecke] and the ladies on the ground do a fantastic job of going out and understanding the mobility requirements at a recipient’s home for example.”

Like Smit, Fyvie represented the Springboks (making his third and final Test appearance in the 44-21 win over Argentina in Buenos Aires in 1996) and captained the Sharks. He retired in 2001 and has been involved with the Fund ever since.

“I was really fortunate to get a lot out of rugby and I wanted to give back to the game,” he explained. “I attended the Fund’s banquet in 2001 and that’s when I realised that the Fund was going to be how I was going to do that. My purpose has always been to add value to people; the wonderful work that the Fund does aligns with who I am in my DNA, so I had to get involved.”

Fyvie first assisted through his business, greenOFFICE. “The market has drastically changed, but at that stage, we had the ability to collect empty ink and laser cartridges and turn that into an opportunity for guys to create an income. They would oversee collection in their communities and we’d then buy the empty cartridges from them and re-manufacture them.

“In that way, we empowered recipients on top of helping them where we can. Through that, we also established greenABLE, which incubates, educates and empowers previously unemployed disabled individuals and through this non-profit organisation, we’re creating between 30 and 50 jobs per year.”

Fyvie entrenched himself in the Fund when he became its KwaZulu-Natal representative in 2005 and he’s been on the Board of Trustees since 2009. The former flank says his commitment to the cause has been flamed that much more by the friendships he’s forged.

“Catastrophic injuries are very unfortunate and through BokSmart, the Fund and SA Rugby are doing everything possible to avoid another serious injury. I was fortunate in that I had my fair share of injuries but nothing major, but where I’ve been even more fortunate is being lucky enough to have met many of the injured players, all of whom remain passionate about the game, and forming a bond with them.

“I got really close with Pierre Lamont and his family in particular. Pierre passed away three years ago, but he was an amazing guy with a great sense of humour and added a lot of value to my life. To be on this tough journey with injured players and to see how they grow as people is incredibly humbling and special.”