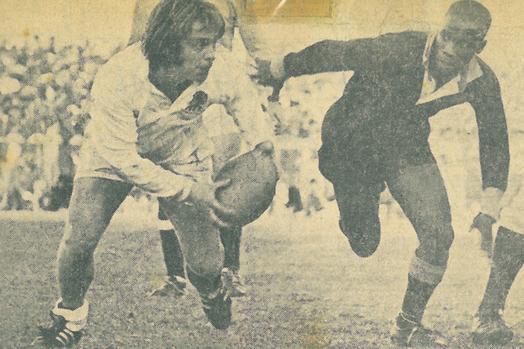 Norman Mbiko steps down from the Players’ Fund board of trustees after serving from 1997-2017.

The Players’ Fund has a history deep rooted in South African rugby, which has brought stalwarts of the game to the table of trustees. Legends of the game which feel it their responsibility to assist in playing the role of Rugby’s Caring Hands in South Africa.

One such legend is Norman Mbiko whom decided to step down after 20 years on the board of trustees. Norman’s contributions to grass root rugby in the townships has been his greatest pride and the staff, trustees and recipients of the Fund extend massive thanks to him for his years of dedication! We bid him farewell and look forward to seeing him at future events as an official friend of the Players’ Fund.

For those with an affinity for rugby and history – this article published in the Weekend Argus on 23 October 2016, written by Bulelwa Payi will be a feast.

Norman was born in 1945. He was educated at Langa High School in the Western Cape and soon made his mark in the rugby world as a scrum half. He played for the black Western Province Rugby Union from the age of 19 until his retirement from rugby in 1979. He caught the eye of the South African selectors and played for the black South African rugby team from 1964 to 1979. In 1972, the Leopards, as the side was knows, played the first match between a black team and an overseas visiting touring side. Norman has been involved in the Fund since

Mention the Mbiko name to rugby aficionados, and the accolades gush out.

It is hard to associate him with the sport though – he is not big-built like many other players, but his size, speed and accuracy played to his advantage as a scrum-half when he led his side to many victories. 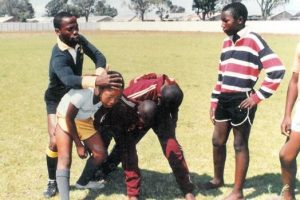 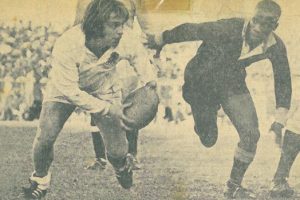 A battle of scrum-halves: Englands Jan Webster has the ball and is challenged by the SA African teams scrumhalf and captain Norman Mbiko.

Norman Mbiko is the first Springbok to emerge from Nyanga, and is a pride of the community.

Sport and politics in South Africa have always been intertwined and this affected the careers of many black players, including Mbiko.

There were three separate rugby boards in apartheid South Africa.

“For a long time there were no inter-racial games. And the resources were also skewed in favour of the ruling party. But we loved rugby – nothing could stop us from playing the sport. In our township, there were no floodlights, but we would still play until the evening, thanks to those who had cars as we used car headlights instead”, he said.

The rugby field was also a meeting venue for political activists – including Oscar Mpetha – who would “pretend” that they were watching and discussing rugby matters while plotting out a future scenario for South Africa. Later, they were arrested while at the field.

For Mbiko, rugby is what would define his destiny.

His home in Nyanga is a showcase of his illustrious career.

Memorabilia is proudly displayed around his living room. Photographs of his international games and achievements frame the walls.

Mbiko was born in Kraaifontein in 1945 in what was then apartheid South Africa. The Group Areas Act saw him being forcibly moved to Nyanga.

The nearest high school he could to attend was in Langa, and it was there that his career took off.

“During those days the principal had a final say as to what sport you would play, after recommendations. My name was submitted for both soccer and rugby. And he chose me for rugby”, Mbiko recalled.

It was a fateful decision – and one he doesn’t regret.

His excellent display of skill on the field soon caught the eye of selectors and in 1962, Mbiko started playing for Western Province.

A year later, he was selected for the black South African Schools team after a convincing performance at a tournament in Port Elizabeth.

In 1965 he was promoted to senior provincial level. And he would get the opportunity to display his skill against the feared Eastern Province and Transvaal teams during inter-provincial games.

In 1967 he was selected for the black national team which played under the auspices of the South African African Rugby Board (SAARB) – against the Proteas, the representative side of the coloured SA Rugby Football Federation.

“My father – my number one supporter – could not get into the stadium where the match was taking place. He would not miss seeing me play – he found a tree nearby – climbed up and got the bird’s eye-view of the match. The Proteas were leading 6-5 and just moments before the end of the match I dropped a goal and we redeemed ourselves and won”.

However, the Proteas were not the only casualties.

“In his excitement, my father lost hold of the branch he was clinging on to – and landed on the ground. Hours after the game ended, he limped home. Asked about the cause of the limping, he pointed at me saying, ‘Ngulo mntana (He is the cause),’” he chuckled as he recalled the incident.

At the age of 21 Mbiko became the youngest black South African captain and was also among the last to receive what was called the South African Bantu Rugby Club badge.

The racial divide in sports also meant few black players would get the necessary exposure to advance to higher levels and ultimately be selected to represent the country.

Mbiko played his first international game in 1972 – against a visiting English team. The game was played at the Wolfson Stadium in Zwide township in Port Elizabeth, and England won 36-3.

The game was marked by racial drama – moments before the start of the game officials from the white South African Rugby Board physically ripped the Springbok emblem off the badges of African players and coaches.

They regarded the Springbok emblem as a preserve for white players. Following that incident, the African players were to be known as the Leopards.

In 1974, he scored two penalties against the British Lions as the Leopards went down 56-10 to the tourists in Mdantsane. His opposite number was Gareth Edwards. Later that year, the Leopards toured Italy for six weeks, playing club sides in Rome and Milan, the Italian U23 team, as well as the national team. It was Mbiko’s first trip overseas, but not the last as he would later lead teams as a coach or captain.

In 1976, he captained the Leopards against the All Blacks in East London, a match that still draws a frown from him. “We did not play well,” he said of the 31-0 defeat.

His last game in international rugby was in 1979 – when he captained the Eastern Province Invitation XV, against Newport in Wales.

Then after unification of rugby in 1992 Mbiko was appointed as a coach by Western Province.

His career includes coaching the SA Sevens team and being involved in Craven Week.

In 2009 he led a women’s squad to Dubai, where they reached the semi-finals stage in the World Cup.

During the World Cup in 1995, he offered some “strategic” advice to Morne du Plessis, the Boks coach at the time, on how to beat the feared All Blacks.

“The strategy was centred around Jonah Lomu – the most feared player in the team. But to confuse him, we decided that it would be best to play the ball on the right side, as he is left-handed. And the trick worked.”

Mbiko retired from Western Province rugby in 2006 and from SA rugby in 2009. Kind and modest, Norman doesn’t blow his own horn.

But former president of the SA Rugby Association (SARA) Oregan Hoskins, said: “My life is richer because of Mbiko. I call him ‘uncle’ because he deserves the title as a rugby man.”

Hoskins was manager of the SA Sevens team in 1999-2000 when Norman was the coach.

“I got to know him very well. At the time he and I would do gym sessions together while on tour and although he was about 10 years my senior, the man was fit.

“One look at his legs told me that he had gone through the proverbial rugby wars.

“His peers told me that he was a great legend of his time and it is a pity that he could not don the green and gold. “But I am truly blessed to have made another rugby friend. This man was a legend,” Hoskins said.

Mbiko has views on the current state of rugby.

“We should take the development of rugby in this country seriously. We can’t just take note just before a World Cup. If you look at the All Blacks their method of play is ingrained in them as it is introduced at an early stage – and by the time players get to the national squad they have mastered it.

“Our current coach is introducing some changes which in the long run will yield best results. But there’s an obsession on winningall the time, leaving no room for the coach to enforce consistency to reach his goal”.

He also didn’t mince his words on the quota system.

“It’s been a double-edged sword. While it was designed to ensure the selection of black players, it has been used to psychologically put them at a disadvantage, as their inclusion is always questioned”.

Regarding development in the black townships, Mbiko is optimistic players will emerge from these ranks to take their place in the Springbok team.

Mbiko is passionate about the growth and development of young players in the townships, has coached many and has in turn been stimulated and motivated by his proteges’ achievements.

“If you have too much to give, too much to offer you cannot just sit and do nothing,” said Mbiko.