Clint Readhead welcomed as a Trustee 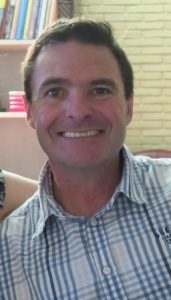 Clint was born in Johannesburg and matriculated from Jeppe High School for boys in 1988. After this he ventured down to Cape Town and the plan was to get a degree and then move back to Johannesburg. Instead he fell in love with Cape Town and never left.

Clint qualified as a Physiotherapist in 1993 at the University of Cape Town and thereafter worked for two years in the Spinal Unit at Conradie Hospital and it was there that he developed the understanding of the life changing journey a neurologically injured person has to endure following injury, through rehabilitation and finally trying to integrate back into society. It was through this experience that Clint was fortunate to watch the opening of the 1995 Rugby World Cup tournament match between the Springboks and Australia as a guest in the CBPJPF suite at Newlands. Rugby has been an integral part of Clint’s career, having been actively involved in it for over 20 years. He has worked at all levels of the game and was a member of the South African u21 teams that won the Junior World Cup in 1999 and 2002 and was then the physiotherapist for the Springboks in 2003 and was part of the Rugby World Cup Winning Springbok Squad of 2007, a career highlight. In 2008 he moved across to rugby administration and is the current Medical Manager at the South African Rugby Union.

Married to Pippa and together they have two wonderful children; Mathew, who is 12, and in his final year of primary school at Rondebosch and Emily, who is 10, and attends Rustenburg Primary School.