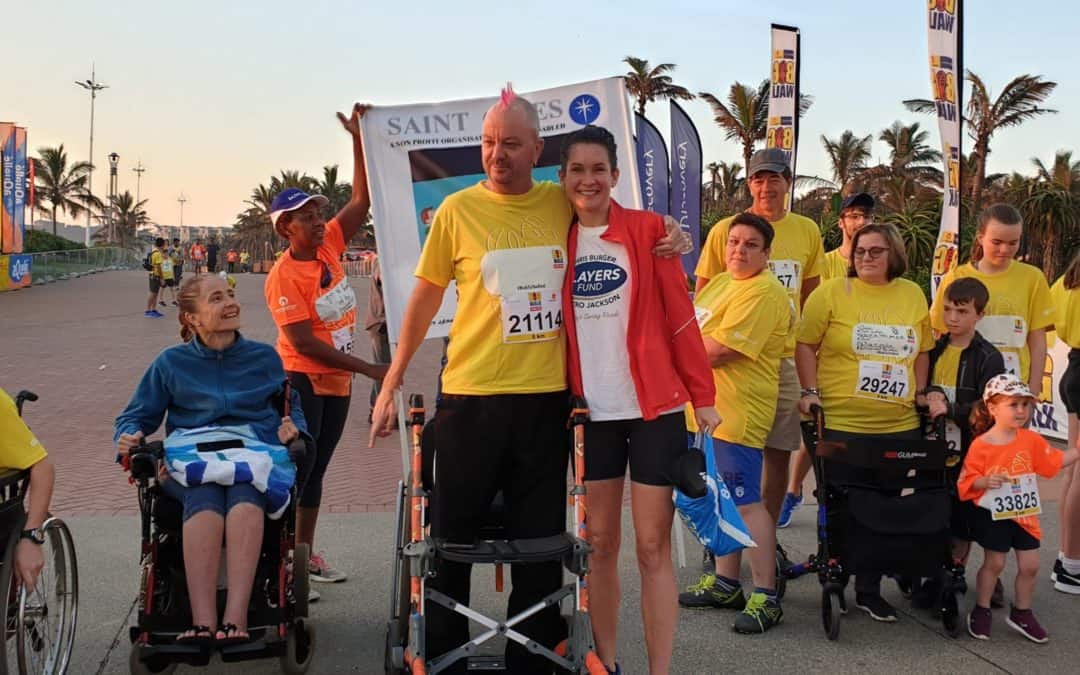 It took Mark Charlesworth 365 days to prepare for the 5km distance. He trained for 17 705 minutes, adding up to 295 hours and 5 minutes. During all these training sessions he covered an astounding total distance of more than 257kms. All in preparation for a 5km walk along the Durban beachfront, which he did to create awareness of people living with disabilities and raise money for a selection of charities that support people living with mobility impairments. The Players’ Fund was one of Mark’s chosen charities and Tori Gardner joined Mark at the event.

Mark broke his neck at C5 / C6 vertebrae level with additional damage to T1 as a result of a freak motor vehicle accident at 60kms/hour on the 21st November 2004. Classified as a quadriplegic and told by doctors that he would never be able to move again from the neck down. However, his self-confessed stubborn nature and an analytical approach to his rehabilitation has enabled him to surpass all expectations and he has affectionately become known as the “walking quadriplegic”.

Over the 15 years following Mark’s injury, he has gained some function in his arms and legs, but still reminds people that he still has to deal with all the mobility and health-related complications that come with being a quadriplegic.  He cannot stand up without using his arms to push himself upright and he uses a frame to enable his walking – without the frame he is unable to even take one step forward.

Mark is fueled by people thinking he can’t do something. Which is why, 7 years ago, in May 2012 Mark climbed the 550 steps of the Moses Mabhida stadium arch. This was no small feat; however, his mission was to build awareness of the challenges that people with disabilities face and in the process raised over R200 000 for charity. The relationship with the Chris Burger Petro Jackson Players’ Fund began then, and Mark was just as eager to bring the Players’ Fund onto the support team as he tackled the 5km event in 2019.

On Sunday 18 May 2019, Mark did complete the 5km Discovery East Coast Radio Big Walk. He completed the distance through the heat of the day in 5 hours and 38 minutes, a comfortable amount of time just over the 5 hour cut-off. All the way along the Durban Beachfront he was flanked by his extensive team of supporters. An incredible group of friends, health care providers, family and therapists who have come to know Mark’s incredible sense of humour and who all agreed that there was no doubt that he would complete the distance, it was just a matter of time.

Mark, reflecting on the year long journey said, “You may ask, why bother to put in all this time and effort just to attempt to walk 5km. Surely it is not worth it! For me the answer is simple, I walk because I can, albeit on a walking frame, there are lots of people in wheelchairs that would love to have the opportunity just to be able to take one step. I understand that, and appreciate I am one of the “lucky ones” even though I have a spinal cord injury, I am very grateful for all I am able to do.”

The Players’ Fund is immensely proud of Mark’s achievement and feel privileged to have been invited to partner him on this journey. The Fund is also very grateful for the donation of R5000 which Mark was able to make as a result of this fundraising and awareness initiative.

Having got to know Mark, and using past behaviour as a predictor of future behaviour – we anticipate that this won’t be the last we hear from Mark.

To learn more about Mark’s story – please watch this video: