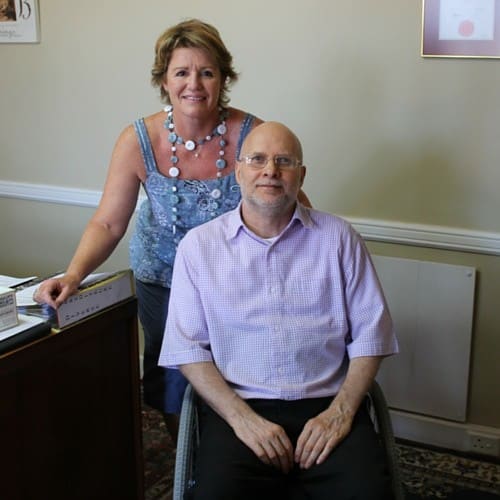 “I was born in Johannesburg on the 9th of December 1962. Attended Laerskool Fairland and Hoërskool Linden. I started playing rugby at the age of 9 at the hooker position which became my speciality. Completed my 2 years national service in the SA Navy Marine Corps. During my final year I played rugby for the 1st team of the Richards Bay Rugby Club and we won the Zululand Club Championships for the first time since the Club was founded. I also represented Zululand U/20. I am still a keen Sharks supporter!

During 1983 I enrolled at RAU (now UJ) for a BComm degree in Industrial Pshycology. I decided that I would rather consentrate on my studies and continued playing rugby on a “social” level.

On the 2nd of May 1984 while playing a match for the Kanniedood men’s residence, I sufferred a dislocation of my C4/5 vertebrae when a maul collapsed. I immediately felt the feeling draining from my body and fell to the ground. My father whom attended all my games, possibly  since my primary school days, came rushing to me. During those “wild years” there was not any first aid present, but our full-back was a GP and he supervised the stabilization of my neck with a raincoat and my transfer onto a make-shift stretcher. An ambulance arrived and took me to the JG Strijdom hospital (now Helen Joseph) only ± 2 km away.

Fortunately the damage to my spinal cord was incomplete – sensory use (feeling) left-side = 60% & right-side = 45% but unfortunately  I was left with 0% motor use (control over muscles). Subsequently I have been using a wheelchair ever since. During the next 5 years I had intensive physiotherapy and did a lot of exercise to improve the little movement I still had. I gained enough strength to enable me to drive my own vehicle with hand controls. It felt great!

My first employment was in the SANDF from January 1989 to April 1991. I obtained my BA degree through Unisa with Pshycology, Communication and Economics being my major subjects. On the 1st of May 1991 (7 years after my injury) I entered the private sector at a company specializing in civil engineering and plant hire. Mentioned company rapidly expanded into several companies delivering in the building, structural steel, mechanical and piping industries where I acted as general manager in charge of finance, personnel and admin. I also served on the board of directors of some of mentioned companies.

I got married during 2000 and accepted alternative employment during 2002 specializing in property development and leasing thereof. My wife and I were blessed by the birth of our daughter Caitlyn on the 25th of April 2004. During 2009 I relocated to Hartenbos in the Western Cape.

– My parents for all their support since that fateful evening in 1984. Best parents ever!

– Support from my friends, my sisters and their husbands, my brother, my daughter and her mother.

– Unisa for allowing me to complete my degree at a discounted fee and special arrangements made to enable me to write exams.

– All the employers and colleagues whom were brave enough to give me the opportunity to show what I am capable of and work with me.

– The Player’s Fund. Unfortunately I never reached out to you guys after my injury during 1984 and was lost until 2009 when you “found” me again.

In closing just the following on a personal note:-

– I like people especialy figuring out what makes them “tick”.

– I dislike able-bodied persons parking in parking bays demarcated for wheelchair users ONLY.